It has been quite a while since I posted on the subject of a specific wine, so I dare not call it "wine of the week" or any other title like that. Times have been busy (wine is my work), and then there seem to have been so many other topics that have urged me to attend to them in some little way.

I also have the great good fortune to taste quite a few really good wines, and yet seemingly not always the time to mention them. But then something comes along that takes you by surprise, going far beyond your expectations. Yesterday evening, to welcome a guest, I walked into my cellar with no special intention, and my eyes lit upon a Languedoc wine that I had been keeping for a few years. Time to try it, I thought.

Back in the house I pulled the cork and what I smelled and tasted just made my senses light up, instantly, ringing all kinds of bells that sounded notes of incredibly perfumed fruit, slightly sweetened, softened and yet somehow, magically, intensified and refined by close on ten years ageing, most of it in my cellar. It also gave equal and instant pleasure to the people with whom I shared it, who are not wine professionals. Hence I do not think that I can be accused of being in any way elistist in my taste. 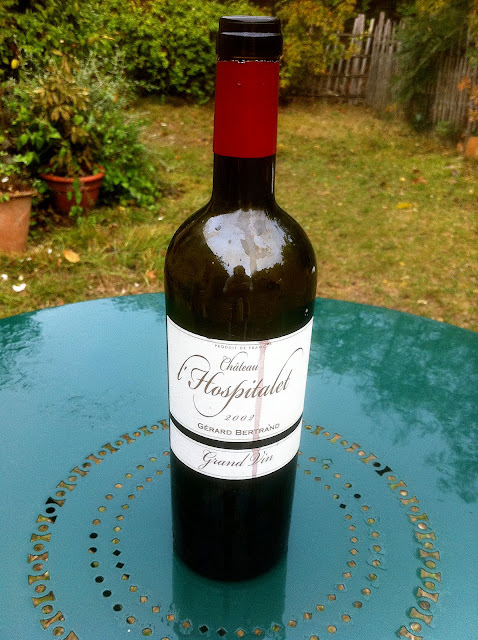 As a first comment﻿ on the label designations of this bottle, I should say that the term "Grand Vin", often to be seen on bottles of French wines, translates loosely as "Great Wine". It has no legal or other significance, and can be placed by the producer on truly great wines or on very ordinary plonk. But in this particular case, I would say that the expression is justified.

Gérard Bertrand is a well-known and enterprising producer who specialises in wines from the Languedoc region of Southern France, from which he hails. He also used to be a very good rugby player. Those who read enough of my blog to follow some of my various centres of interest should realise that this could well be enough to endear him to me. But beware: I am capable of separating things enough to make my impressions of this wine quite free from bias, although I did not taste it blind. It simply tasted very good, and clearly showed that some wines from the Languedoc can age very gracefully, becoming more refined yet retaining the quintessential fruit flavours that make them so attractive in their youth. And yet it had clearly moved on from the infant stage, gaining in complexity, patina and softness. It lingered beautifully on the palate too. You simply wanted another glass of it!

This is not the first excellent top-of-the-range wine that I have tried from Bertrand, but I was curious as to the blend so I tried to glean some information from the producer's web site. Unhappily this is so badly designed that it was impossible to find any particular wine on the site's so-called search box. I should also add that the English translation is quite appallingly bad! 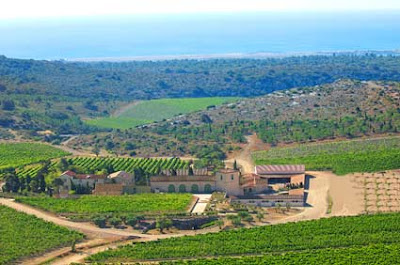 I have visited the estate of l'Hospitalet, just south of the town of Narbonne on the rocky limestone outcrop called La Clape, which used to be an island during Roman times and which overlooks the Mediterranean (see above photograph). The estate also harbours a hotel and a restaurant, several shops, including a wine shop for the producer's wares, and once a year holds a good jazz festival. In other words, here is a modern, go-ahead producer who has understood that tourism and wine go hand-in-hand and who is making the most of his assets.The company should pay a little more attention to their web site however!


Since he took it over, Bertrand's enterprise has been very successful, moving from a single estate in the Corbières region, inherited from his father, to a current vineyard holding of 325 hectares (some 800 acres), divided between 5 estates in different Languedoc appellations. The company also sells wines that they trade from other parts of the region. They have been pioneers in many respects, and I have rarely (never?) had a poor wine from them, each wine showing good to very good value at its specifc price point.

I dearly wish there were more producers in France of this scale and with this quality emphasis. Some wine snobs (and I am sadly tempted to include some journalist colleagues in this group) seem to curiously despise success and think along the sectarian lines of "only small is beautiful". If they had shared this bottle with me last night, they would definitely be rethinking this particularly silly piece of dogma.

Email ThisBlogThis!Share to TwitterShare to FacebookShare to Pinterest
Labels: wine vin and vino