AC Cobra: one of the few cars I would like to own 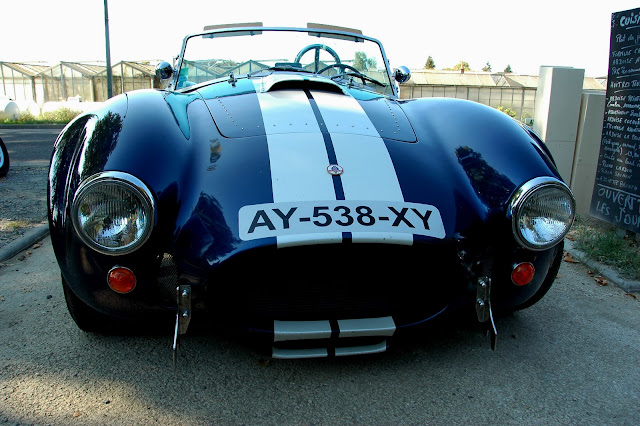 
A few weeks ago I was in the Loire valley for the 2011 edition of a fun event, whose edition of last year actually incited me to start this blog about a year ago. I will say some more about it, and especially the place that generated this event, the magical Café de la Promenade in the small town of Bourgueil, quite soon.


The car above drove up to the Café de la Promenade during a Sunday afternoon early in October, when I came back there for a break between wine tastings. When I heard it and saw it, an improbable desire came back to me.
This is the first time in this blog (in over a year) that I have talked about a four-wheeled vehicle. It will probably happen again, but the first time is always a bit special (usually, at any rate).

Yes, I would love to drive, and maybe own (at least for a while), an AC Cobra. This car has always seemed to me to be a kind of essence of the minimalistic sports car, rather like a Lotus but with that extra grunt that can only come from a big engine.

Here are a couple of extracts from the Wikipedia entry on the Shelby Cobra:

"The AC Cobra, also known colloquially as the Shelby Cobra in North America, is an Anglo-American sports car that was produced during the 1960s."
"The Cobra was perhaps too successful as a performance car and reputedly contributed to the implementation of national speed limits in the United Kingdom. An AC Cobra Coupe was calculated to have done 186 mph (299 km/h) on the M1 motorway in 1964, driven by Jack Sears and Peter Bolton during shakedown tests prior to that year's Le Mans 24h race." 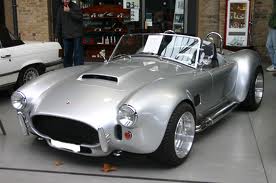 "AC Cobras had an extensive racing career. Carroll Shelby (the US partner) wanted it to be a "Corvette-Beater" and at nearly 500 lb (227 kg) less than the Chevrolet Corvette, the lightweight car did just that. It was February 2, 1963 at Riverside International Raceway that driver Dave MacDonald beat an impressive field of Corvettes, Jaguars, Porsches, and Maseratis to give the Cobra its first-ever victory. Later, Shelby offered a drag package, known as the Dragonsnake, which won several NHRA National events with Bruce Larson or Ed Hedrick at the wheel of CSX2093.""Although successful in racing, the AC Cobra was a financial failure, which led Ford and Carroll Shelby to discontinue importing cars from England in 1967. AC Cars kept producing the coil spring AC Roadster with narrow fenders, a small block Ford 289 and called the car the AC 289. It was built and sold in Europe until late 1969. AC also produced the AC 428 until 1973. The AC Frua was built on a stretched Cobra 427 MK III coil spring chassis using a very angular handsome steel body designed and built by Pietro Frua. With the demise of the 428 and succeeding 3000ME, AC shut their doors in 1984 and sold the AC name to a Scottish company. The company's tooling, and eventually the right to use the name, were licensed by Autokraft, a Cobra parts reseller and replica car manufacturer owned by Brian A. Angliss."

So much for its technical and racing history, albeit greatly abbreviated. I suppose that the thing that turns me on with this car is that is is so close to a bike in spirit, except for the fact that it has 4 wheels under its body.

Email ThisBlogThis!Share to TwitterShare to FacebookShare to Pinterest
Labels: Motorbikes and other objects