Try Croatia and its wines

I should first apologise to any regular readers for not having posted on ths blog for over a month. It has been a busy and intense time, but there is plenty of stuff in reserve over the coming weeks. Patience is all!

Recently, I was fortunate enough to go on a far-too-short trip to Croatia, to sample some of its wines, see some of the places where they are grown, and meet some of the producers. It was a journey of discovery, memorable on many levels, and I will attempt to take you through just a few of them. 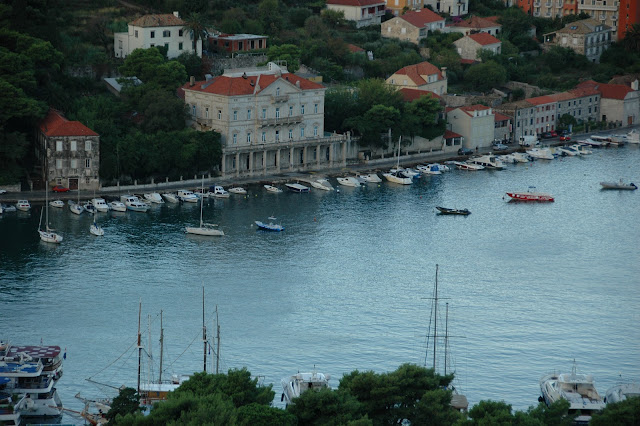 The port that serves the spectacular, and often crowded, walled city of Dubrovnik, which has to be one of the most beautiful towns in the world if only one can visit it away from peak times of year, when the cruise ship hordes flood the main street. (photo David Cobbold) 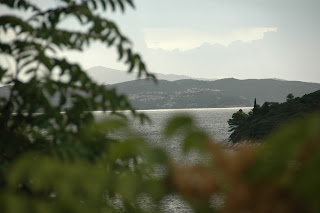 view from the fortress of Dubrovnik (photo David Cobbold)

I suppose the image most people have of Croatia is the Dalmatian coast between Dubrovnik, at the southern extremity of the country, and Split, together with the many islands and peninsulas that escort this often spectacular coastline like so many small boats around a cruiser. The heavily indented coastline at times forms large fjord-like areas which shelter boats and vines alike, the vines flowing down to the water as if to meet it and draw much needed freshness. 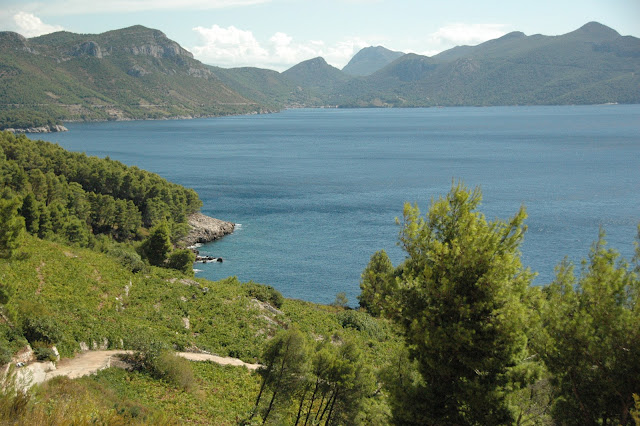 On the peninsula of Peljesac, north of Dubrovnik (photo David Cobbold)
But Croatia is much more than this very mediterranean paradise for tourists and those who are lucky enough to live there. The country is clearly divided into two parts, with various sub-sections﻿, and this goes for geography as well as wines (of course the two are connected). The coastline, that stretches from Bosnia in the south to Slovenia in the north (and almost to Italy) is separated from the greater part of the country by high mountains. Moving inland, past Zagreb the capital, Croatia follows the southern border of Slovenia, going eastwards to that of Hungary, before moving south along the Danube, encountering Serbia, against which it fought a fierce defensive war in the early 1990's. Dubrovnik has been rebuilt, after its shameful bombardment, but the traces of this war are surely there, in the hearts and minds of its inhabitants. Yet Croatia is clearly looking to the future, and this shows in its wines.
Its vineyards cover some 33,000 hectares, which is precisely the size of France's Champagne vineyards. They are divided amongst the 2 main regions, coastal and inland, with 12 sub-regions and a surprisingly high number of 71 appellations. This fragmentation is surely the heritage of a mainly peasant economy, as well as some fairly tortuous topography that make large expanses of vines a rarity in Croatia. As a corollary of this, and the fact that this is also a very old wine-producing area, there are a large number of indigenous or regional grape varieties. 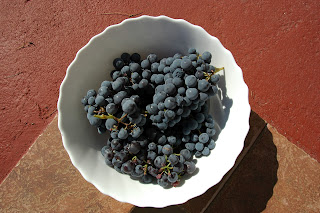 Plavac Mali grapes at harvest time. This cousin of the zinfandel (which originated in Croatia anyway) is the most planted red variety along the coastline (photo David Cobbold)
In the modern world where Cabernet, Merlot, Syrah, Chardonnay and Sauvignon Blanc amount to the sum of most consumers' wine vocabulary, this natural diversity can be construed either as an advantage: being different and standing out; or as a drawback: having grapes that nobody has heard of and whose names few can pronounce. I welcome you to try to pronounce Grk (a fine white variety from the island of Korcula) or Crljenak (which is the same variety as Zinfandel), for example, if you are not a Croatian speaker. 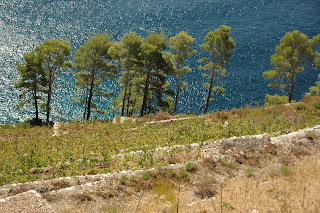 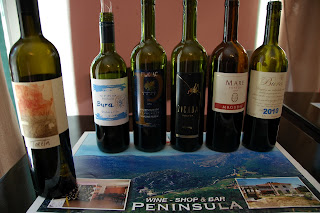 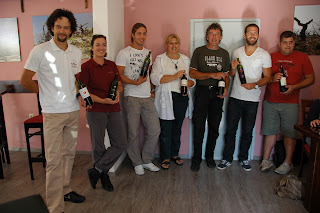 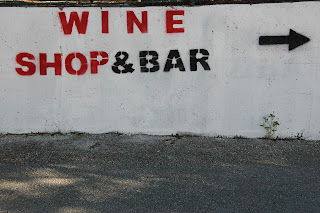 These four photographs could act as a visual summary of my first tasting of the wines of this part of southern Dalmatia. From top to bottom we have the vineyard (or one of them, on a very steep site facing the sea), my favourite wines from the tasting, the producers who were there, and the sign outside the place where the tasting was held, in the village of Donja Banda, on the peninsula of Peljesac. This shop /wine-bar www.peninsula.hr is a very pleasant place with a good selection of local wines. It also sells via internet and, if you can make it there, has good food too. It belongs to the lady in the centre of the photograph, Marija Mrgudic, who also produces some of the best wines from here.

The 18 wines we tasted in this session were all from Peljesac or the island of Korcula that prolongs and overlaps the peninsula. The majority use the Palac Mali red grape, but there were also 2 whites, one each from Grk and Posip varieties. It is impossible to give a fair idea of a variety when you have just tasted one sample, but we did taste several other wines made with Posip during the trip. It is a grape that produces high natural sugar levels and hence has considerable alcohol. This can make the wines seem a little clumsy and lacking in the freshness required by the very good local seafood. But the one on the left of the bottle picture above, Toreta Posip 2011, from the producer Frano Branicevic, I found to be pleasantly vivacious, with a vibration that made it feel more intense, fruity and light than any others I had tried.

Coming to Plavac Mali, we tasted at least two levels of wines. Simple and fruity ones made as entry-point wines for everyday drinking, and more ambitious wines for, perhaps, winter consumption (given their considerable power) or drinking with strongly-flavoured food. Of the first category, I enjoyed the bottle on the left, with the white and blue label: Bura Plavac 2011, from Niko Bura. The Miolos Plavac 2008 from Frano Milos was also good, despite slightly dry tannins on the finish. Moving up the quality scale, I found the Zikada Postup 2008, from Kangjera Baldo, strongly reminsicent of a good zinfandel (which is after all a cousin of Plavac Mali). Postup is a specific, steep and historical vineyard, and, as with some others, appears alone on the label without mention of the Plavac grape variety. This is a clear example of the "cru" approach that constitutes the upper level (price-wise and, hopefully, quality-wise) in Croatian wine production. Of course the quality always finally depends on the producer, but we are talking, as in Burgundy, about theory and potential. From what I tasted here, it is true as well! 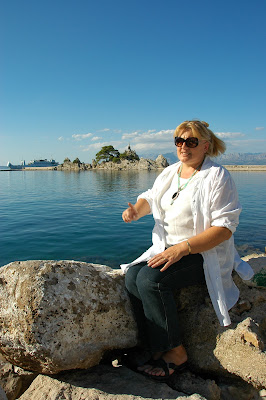 Marija Mrgudic, like the mermaid of Copenhagen, says goodbye to us in the port of Trpanj

The best two wines in this tasting were also from the Plavac grape and single vineyards. Another wine from the Postup vineyard was the Mare Postup 2009 from Marija Mrgudic. This had a gloriously rich and fruity nose, and was equally intense and juicy on the palate. Superb quality of grapes, pure pleasure! Then came another great wine with a different profile that showed at its best with the grilled meat we ate afterwards. Bora Dinjac 2010, by Niko Bura is from a single vineyard called Dinjac, and Niko happens to be Marija's brother. This is perhaps more in the register of finesse with even a touch of austerity. Both tannins and acidity show more, and the wine has terrific length. A different style, but both wines rate 17/20 for me. We also tasted a glorious sweet wine made with the Plavac grape. It is not on sale yet, but it shows another, and very promising facette of this variety. Quite possibly it has been used in this style in past years, like the Reciotto style which preceded Amarone in the Valpolicalla region of Veneto. The flavours bring one very close to those found in the grapes I tasting from the bowl (see above). 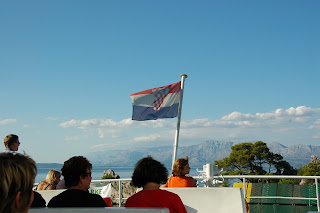 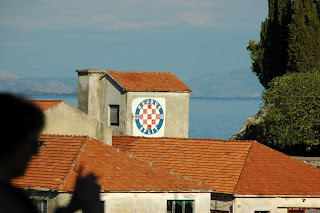 As we sailed away from Peljesac, to the next stage in this fascinating trip, I was thinking Croatia rules, right? And thanks to Plavac Mali.


all photos by David Cobbold, although Marc Sibard pressed the button on the flag picture!﻿