Yes, I have to return to this fantastic restrospective exhibition that has recently closed in Paris of the work of Braque. I may well do so again, such was the density and interest of this show.

I mentioned in my previous article on Georges Braque that his work probably started to change again after the shock caused by the First World War. But this is not all that evident in the chronology of the show, since the almost completely cubist period, in one form or another, actually lasted until well into the 1930's, as the image below shows. He clearly had to pick up where he left off in 1914, but changes there were. This painting, called "The musician", dates from 1917-18, but it already shows a significant change in the preoccupations of Braque's work as it reintroduces colour as a major element of the composition. Now let's look back to 1907 and see how things have turned around with regard to Braque's relationship with colour, as in this painting of a woman's back. Colour is clearly a major ingredient of the impact of this work which dates from the early years of the 20th century and Bracque's "fauvist" period, in which form and shape is also of growing importance, as is shown in this painting. Just a year later, form, and its breaking down into geometrical components, had taken over from colour, the use of which which had become very much more subdued, as in the painting below, of a similar subject. 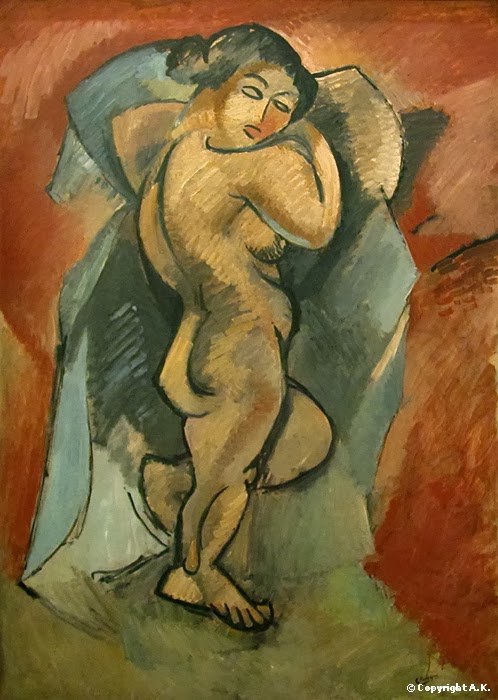 As I said in the first article, one can then clearly trace the decline of the role of colour in the hierarchy of Braque's interests, and the corresponding rise of the analysis of form and the creation of a type of synthetic vision that we call, for want of a better word, cubism. 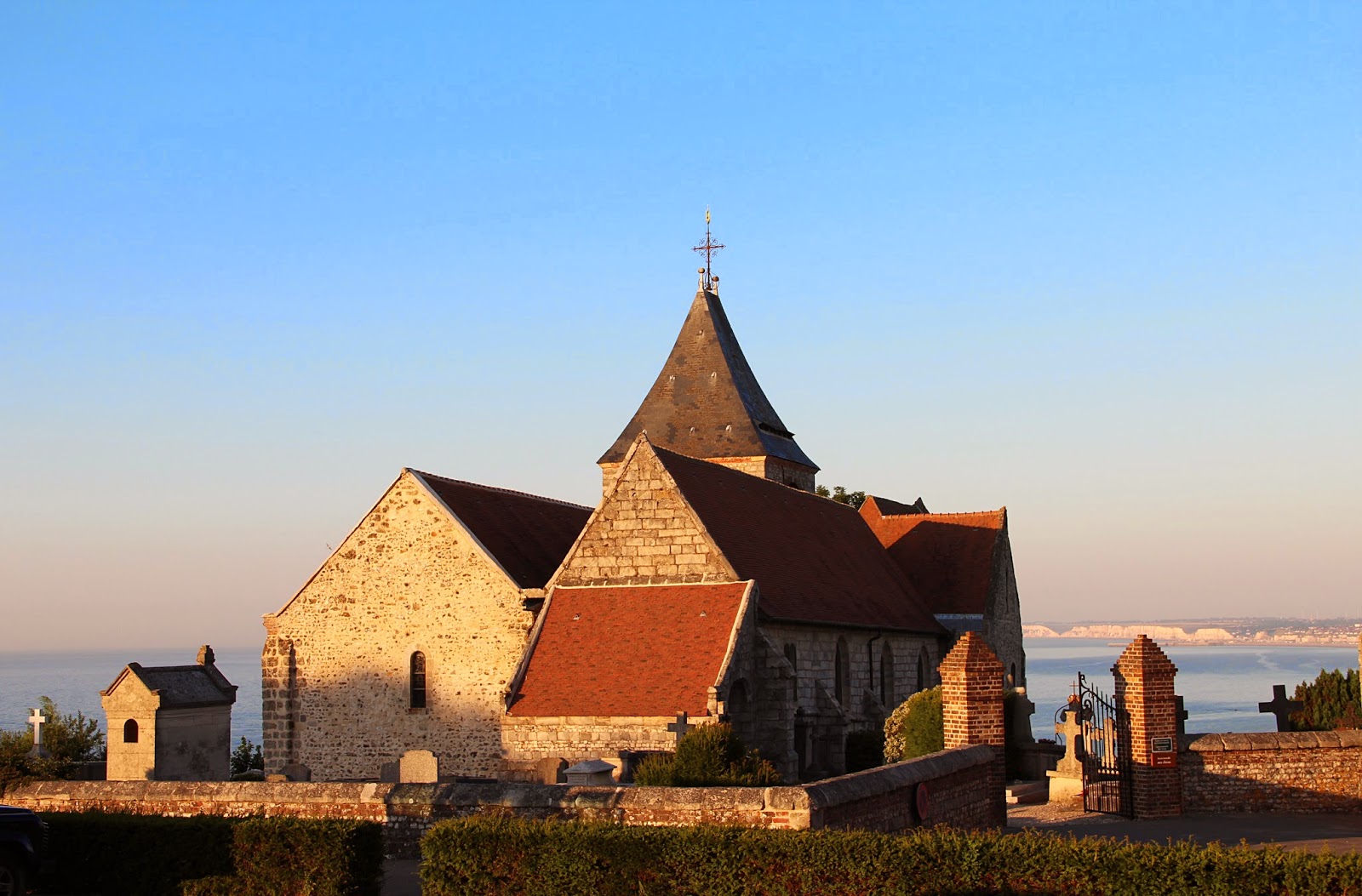 Possible inspirations for this line of work can be seen in architectural situations like this one, from the Normandy village called Varangeville where Braque had a studio. A beginning of what was to be gradual abandonement of what Bracque possibly saw as a dead-end in the pursuit of cubist exploration shows in the painting above, dating from 1939, and which, while continuing the use of many subject matters that had served him throughout the cubist phase (musicians and their instruments for example, and here we should remember that Bracque was himself a good musician), is also in a much freeer, more playful style and includes the use of colour. 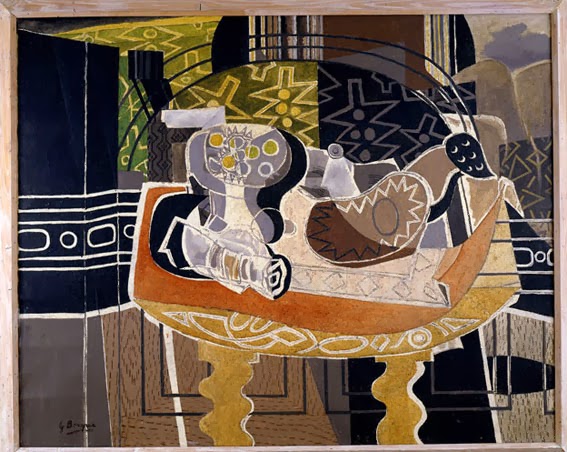 Later still-lifes and studio interior paintings take this playfulness much further, moving away from the systematic approach of cubism. This painting also shows that black was always an important colour with Bracque, at least after the fauvist period. And he never seemd to find the sky again (see the previous article). The still life below, which dates from 1942, shows yet another shift towards greater simplification of forms and composition in a way that parallels that of Matisse, for instance, and which introduces his final period of work. 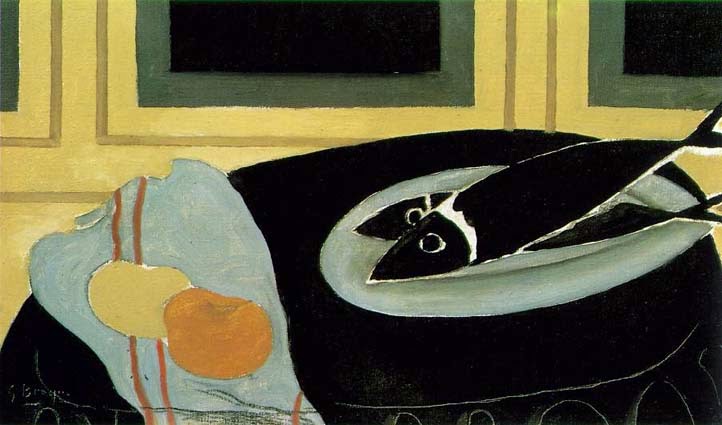 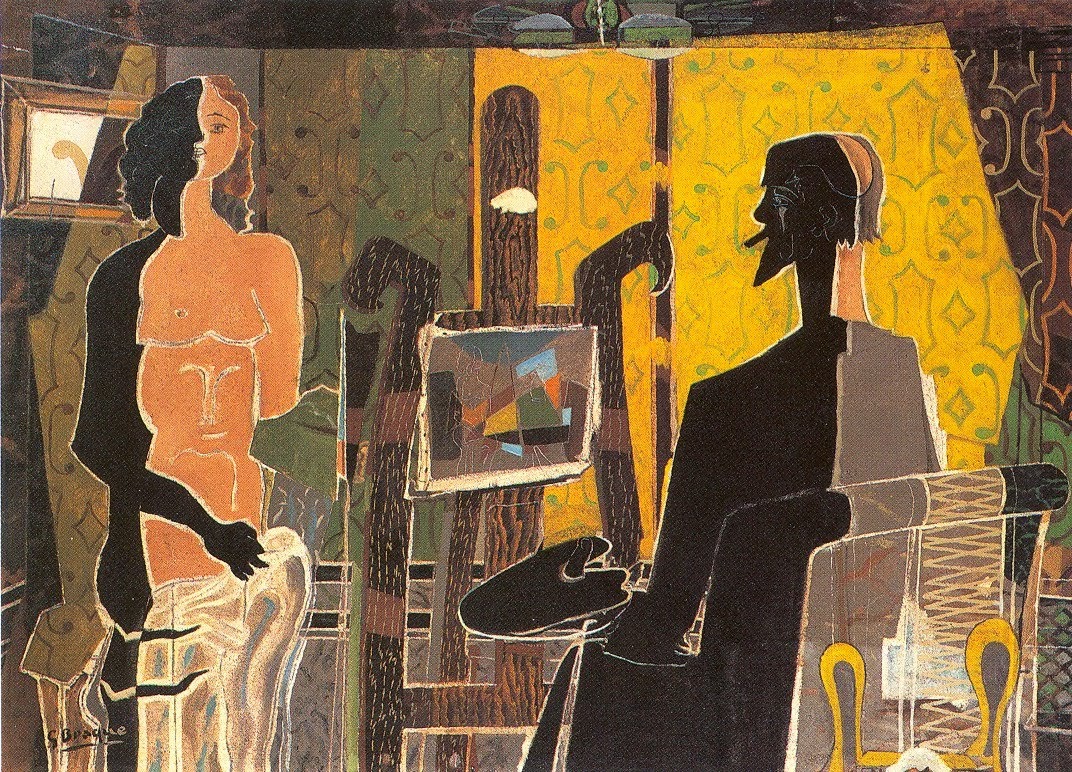 Parallels between Bracque and Picasso have often been drawn. Whilst the two had an intense relationship of exchanges during the early cubist period, Bracque had perhaps a more studious and less spontaneous appraoch to panting then Picasso, as show in this painting of the artist and his model, a theme also much used by Picasso in a different vein.

More to come on Bracque probably, as and when I find suitable images to illustrate it. But we will also move to Dürer shortly, as I recently saw a fantastic exhibition of this great Grema,n artist's work In Franfurt am Main.

Saying that the painting of Georges Braque is overlooked is perhaps stretching a point. But how many people would recognize his name, not to mention his rightful place in modern painting, alongside Matisse, Cézanne or Picasso? And yet he truly belongs there, as the magnificent recent show in Paris of his work has convinced me. 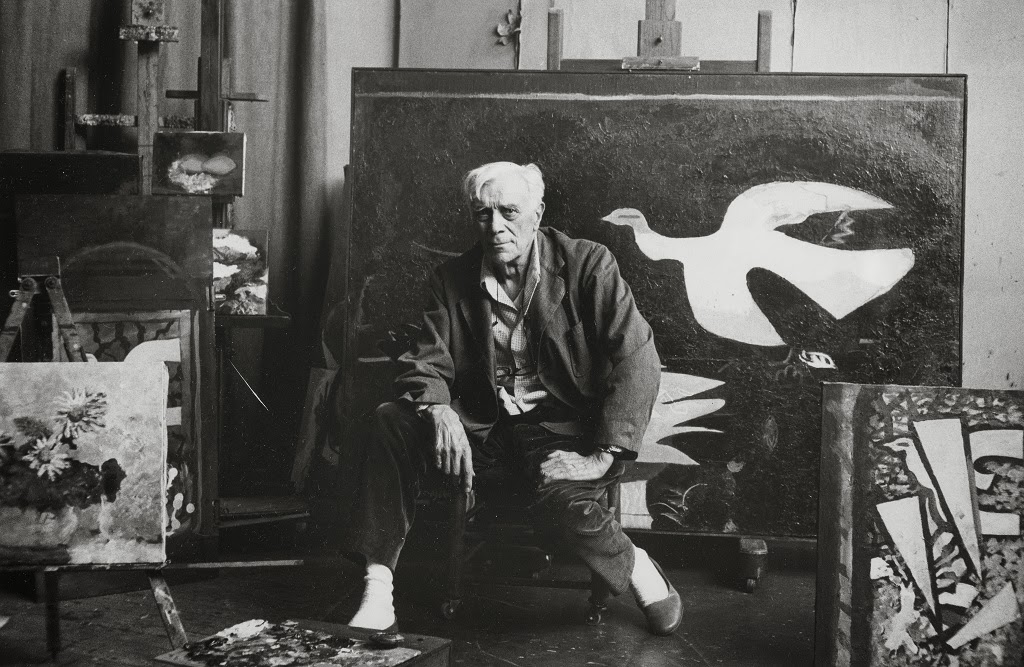 In the matter of painting, I feel that images usually speak louder than words. Still in some cases, words can be useful, if only to comment, put in context, or attempt to explain what one sees and understands. Because seeing, rather than looking, is all about feeling and understanding. A dog may be able to see a painting. But what it feels or reads into it is another matter and anyway it will not be able to express this, and thus communicate with us. Birds are perhaps another matter, as one Japanese scientist has attempted to prove here.

Georges Braque, born in 1882, lived quite a long life of 81 years and apparently hardly ever ceased working at his painting and other visual work, except during the First World War when he was seriously wounded as a soldier. The recent exhibition of his work in Paris, which has just closed at the Grand Palais, was extremely impressive for its sheer density, as well as its quality. Braque is, for me, a great and truly admirable artist. He just kept at it, whathever the path he was exploring at any time, working, often simultaneously, on several varaiations of the same theme.  After seeing the show, an acquaintance of mine made the remark that his painting is very masculine and that she did not like much of it. I am unsure whether one can qualify painting as "masculine" or "feminine", so I will rest on that one.  Is it really because I am masculine that I liked this show so much? 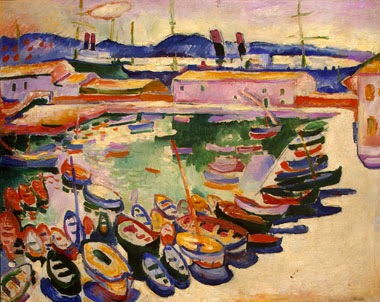 
His early works in this show were very much a part of the fauvist style, as in the above painting, and I did not find them, with a few exceptions, to be among the best examples of this movement that ushered in the 20th century. 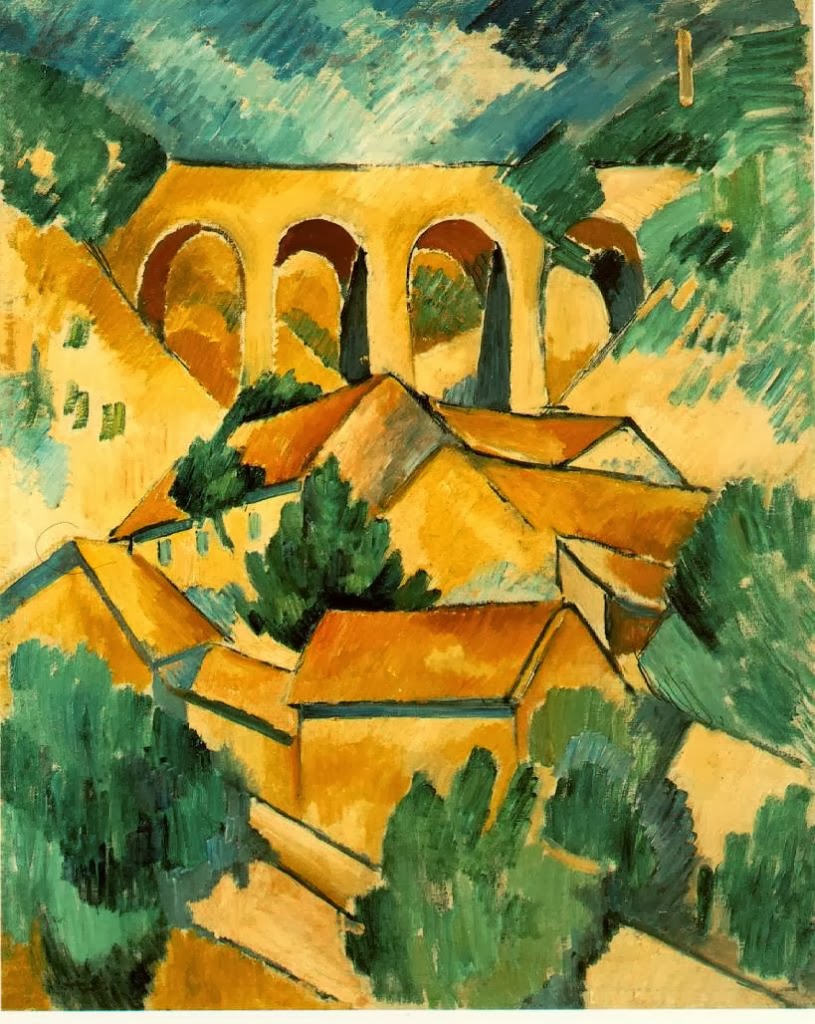 His study of Cézanne then led him to a more rigourous approach, analyzing and simplifying forms and colours that, in turn, then led into the cubist style for which he, as well as his contemporary Picasso, are well known. This constitutes (visibly in the hanging I saw) a first major break in his approach. For one thing the sky disappears (last appearance I saw was in the painting above), never to reappear again. And with it the colour blue, at least for a long time. Braque became concerned mainly with form, with light acting at times a shaper of form. His pallet of colours also shrinks dramatically, from the bright primary and secondary coloured dots, lines and patches on a white surface (which lends its added brilliance) to the use of just three subdued colours in various shades : grey, ocre and green. 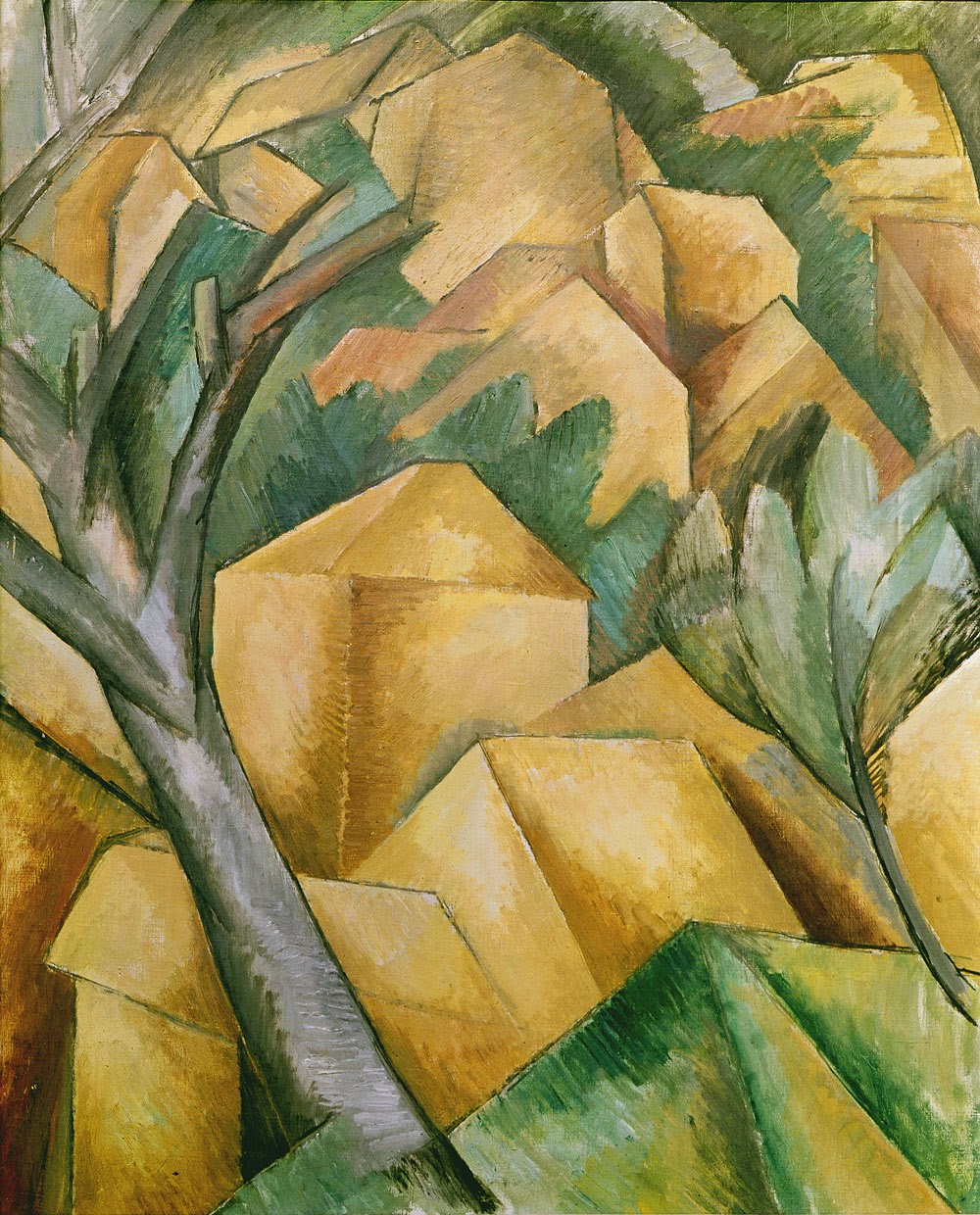 And then, at the height of his analytical cubist work, to almost monochromatic work, as below, but with very subtle use of nuances to provide volume to the very complex and imbrecated shapes. 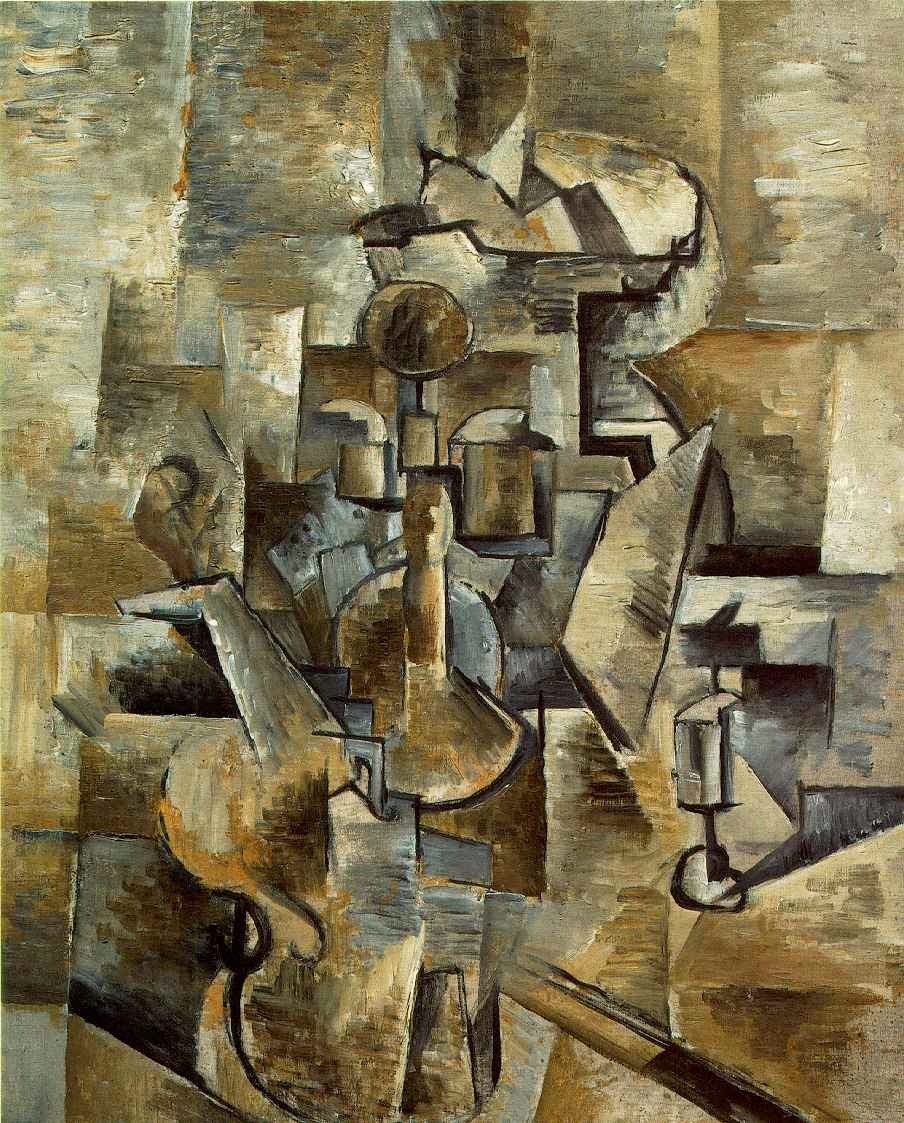 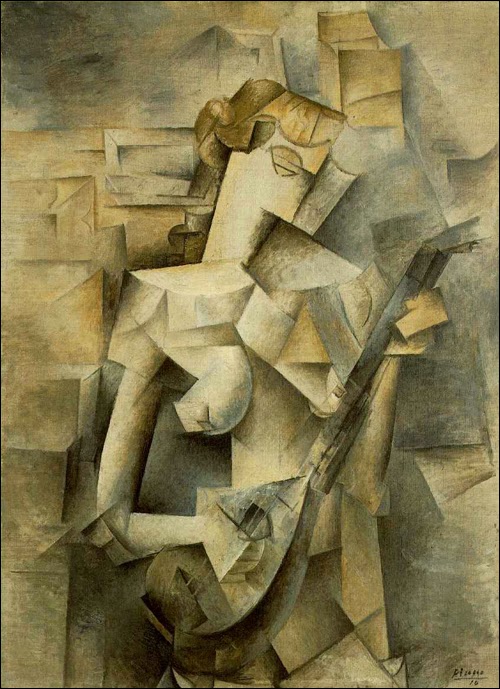 Braque seemingly came to the end (the limit?) of his cubist experiments with the almost abstract drawings and collages as below, which further retricted means to an austere use of a few elements, relying mainly on pencil or charcoal on paper and scarce introduced materials. To prevent these works from becoming totally detached from any form of recognizeable reality, Braque used subterfuges as "reality quotes", such as lettering or bits of newspaper or small parts of an identifiable object drawn. 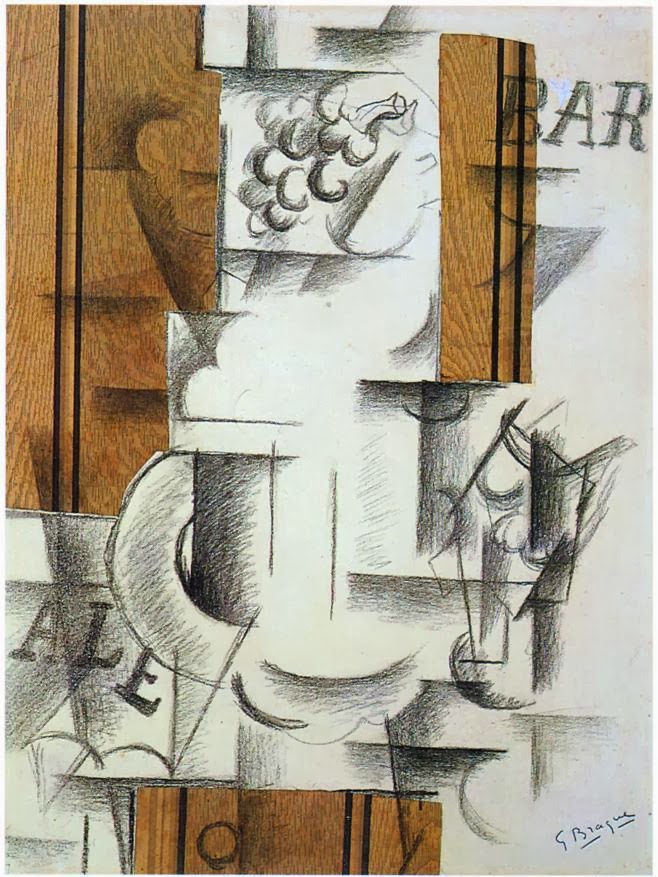 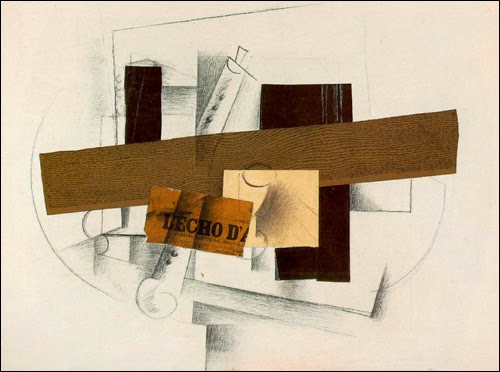 I feel that, scrolling down these images much as walking through the exhibition (which was naturally far denser), one can follow the evolution of his work over the period that led up to the First World War. This terrible episode (Braque was a soldier and suffered a severe wound in 1915) was to produce a break in his work in many senses, I felt, looking at all this very impressive work, that Braque really blossomed after the war. The intense exploration and applied workmanship of this early period paid off later as he became much freer in his whole approach.  But I will resume the story in another article. 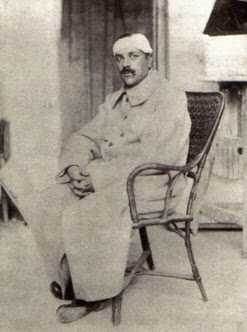 Fashion, stupidity and the superfluous

I suppose that one could say that the first two are synonymous, to a point.The third being a frequent corollary and companion to both. The reason for raising this topic is a recent short article that I noticed in today's edition of the weekend magazine supplément of what I consider to be regularly the best French daily newspaper, Le Monde. However this supplement, recently renamed M, has unfortunately become pretty much a fashion catalogue, the majority of it's pages, formely full of in-depth articles, now being polluted with totally uninteresting stuff about of "trends", "fashion icons" and other superflous crap. The newspaper istelf continues to be good, but this is pure decadence, and uninteresting decadence at that. 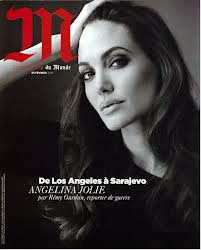 a past cover of the M magazine, which I consider to be unworthy of its parent newspaper Le Monde


Flicking through the pages of this latest edition, which is usually the most I feel inclined to do with this thing before stuffing it in the waste bin, I noticed a short piece on the recent rush by fashion victims in the USA to purchase the latest model of sneakers produced by the Nike brand under the Air Jordan logo. Put on sale on December 21st, this shoe apparently caused some idiots to queue up all night and then fight for places in the queue. I don't know what the price of this useless object is, and I don't care, but I find something quite revolting about people going to such extremes for soemthing so totally superfluous and, probably, over-priced. There may be good reasons for standing in queues, like getting food when you are starving, but doing so (and all night!) for something you don't need seems the ultimate in consumerism gone mad. 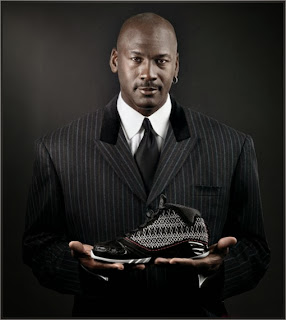 former basket player Michael Jordan with one of the shoes made by Nike that use his name and, probably, bring him even more money


Why does this get my goat? Maybe I just felt like a little rant. Who knows? I know that this is not the most serious sign of madness in this world, but it is definitely one of them and I hate it.