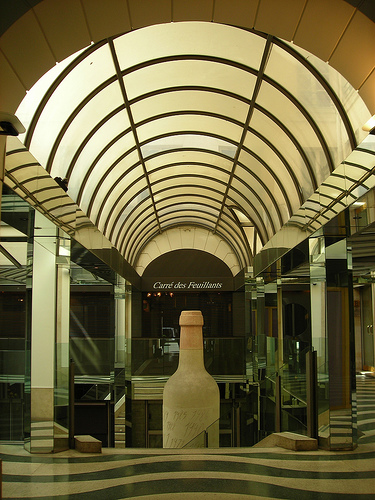 The inside courtyard that leads to the Carré des Feuillants﻿ restaurant
I am not a restaurant critic. I lack the knowledge and that hidden spark of motivation that provides an extra layer of energy so necessary to any profession, and which separates the plodders from those who do their job with love and enthusiasm, at least most of the time. I really am not a out-and-out "foodie". I enjoy tastes and textures, and all kinds of them, as varied as possible, including very simple ones. I take care with what I eat and prefer not to eat at all than eat rubbish (apart from plain survival, naturally). Yet I choose a restaurant above and beyond all for the atmosphere it contains, and for the people who run it. Going to a restaurant is to me a bit like going to someone's house. If I do not feel welcome, or at ease, then I will either leave or not go back there. Neither am I a great fan of long and formal meals. Therefore I will never wait for months for a booking to go to THAT particular restaurant, nor will I stand in line in everyday places. I would rather go elsewhere, try something else, and anyway avoid the crowds.  So you may well ask why on earth am I writing about a 2-star Michelin restaurant that is, to me, one of Paris' best, although I have not tried them all by a long chalk. 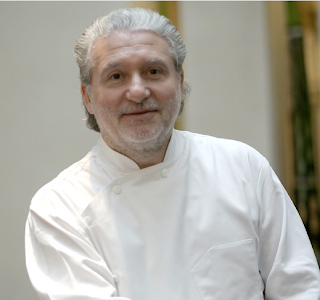 The answer is that, first and foremost, I like and greatly respect the chef behind this place, Alain Dutournier. Of course the quality of his food is quite extraordinary, generously full of flavours and those textural contrasts that are so much a part of fine cuisine. The style is modern, yet with a direct and constant link to the natural characteristics of the well-chosen ingredients he uses. Dutournier is a craftsman in the noble sense of the term. He is rarely absent from his restaurant, and, throughout his now long career, he has always sought to improve and create, whilst never denying his origins in the Landes region of South-West France. He is also a thoughtful, soft-spoken and generous man, the very anthithesis of certain super-star chefs whose heads are so swollen that they may need hats to keep them on. 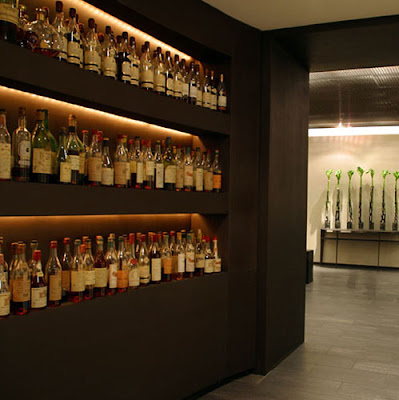 The entrance area, somewhere between Armagnac and Japan 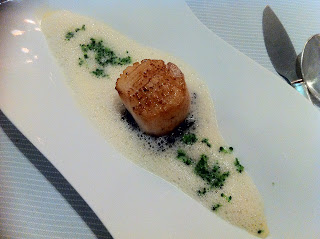 I was prompted to write this piece by a recent meal taken at the Carré des Feuillants, his restaurant near the Place Vendome that you have to seek out at the back of an internal courtyard, under the arches that line the Rue Castiglione (a touch of discretion that resembles the man himself). There was something special and unusual about this lunch, as it had been prompted by a grandson who has recently declared, aged all of 11, that his ambition is to become a chef. We all know that childhood urges often deviate from their initial path. I seem to remember that I wanted to go into the army when I was his age!  But this boy also said that what he most wanted for a Christamas present was to eat in a really good restaurant. So I decided to take him to one, and I chose Alain Dutournier's not only because I very much like the place, but I also knew that I felt up to asking the chef if he would take the boy into his kitchen and show him around. And this worked out beyond my expectations. We both left with stars in our eyes. Me on account of the fabulous succession of dishes that flowed from the "menu dégustation" that the chef prepared for us, plus the wines that he served me. I should add that Alain Dutournier is a chef, perhaps one of the rare ones, who truly loves his wine and knows more about the subject than most specialists. Paul, my grandson, was probably groggy from so much (magnificent) food, but he also had (time only will tell) received a vision of the heights to which food, and all that surrounds it, can be raised.We both just floated out of there on our clouds and clambered back down to the below-ground realities of the Paris metro. 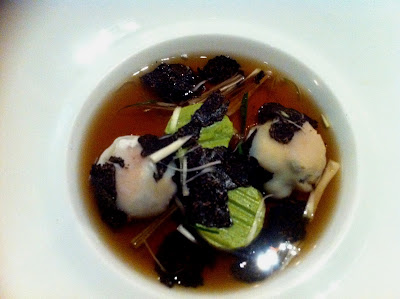 The Carré des Feuillants restaurant is as fine as anything that I would ever want in this department. It also has one of the world's best wine lists. If you come to Paris and like the best food and wine, served with ease  and grace in a natural, unforced way, this is the place that I would recommend. Who needs three stars anyway? We had, as I said, stars in our eyes, and they were from pure joy, not from any razzmatazz (the French would say blingbling nowadays).
www.carredesfeuillants.fr/
Posted by Unknown at 05:24

Email ThisBlogThis!Share to TwitterShare to FacebookShare to Pinterest
Labels: places to go