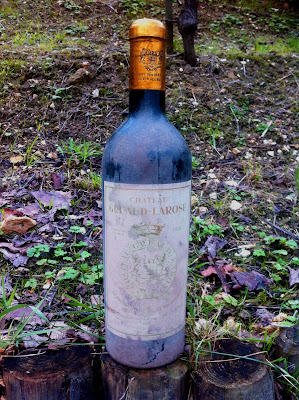 Château Gruaud Larose 1916
This choice could easily lead to my being accused of harbouring just that sort of elitism for which I criticised Jonathan Nossiter in the article published yesterday﻿ on this blog! But I am not suggesting that you should rush out and buy this wine. For a start it is going to be very hard to find. And it may not be to everyone's taste anyway. But, to the group of wine professionals who had the good fortune to share it last Friday, thanks to the generosity of Yves Legrand, it was unforgettable for several reasons.
The bottle was in impeccable condition for a wine that is now over 94 years old. It had almost certainly been reconditioned, as the (crumbly) cork bore marks that would date from the 1960's or 1970's, according to one specialist who was there (Laurie Matheson, who is the wine expert for the auctioneers Artcurial). As can be seen from the photograph, the label is faded but intact, and the foil condition impeccable, as was the level of the wine in the bottle. There were actually two foils seals over the cork. The initial red seal was covered with the gold one you can see on the photograph above, which may enhance the theory of a reconditioning at the estate at some point. 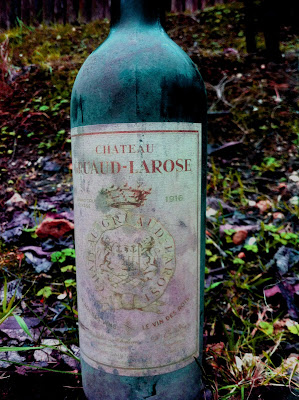 However good the wrapping, the proof of the pudding is the eating, so let's move to the taste of this wine. Its colour was surprisingly dark. Without knowing is age beforehand, I would have said that it was the colour of a wine of 30/40 years, not over 90. I had a bit of a cold yesterday, so my smelling capacity was reduced. All the same I dedected strong white truffle aromas (the white truffles of Alba are very reminiscent of garlic), also a touch of mint and something animal-like such as old leather and fur. The feel on the palate was lively, with highish acidity yet quite a rich, velvety texture. In fact the tannins, although well burnished and drawn out, were still quite firm and noticeable under the flesh of the wine. Sinewy is probably the word. The wine was very much alive and kicking. Indeed it constantly evolved in the glass, actually improving during the 30 minutes or so that we spent admiring it and reflecting on its birth and lifetime, as we ensured and accompanied its death.

It is always a moving experience to drink a very old wine. I feel as if I have gotten into a sort of time-machine and can see the generations who were alive at the time, and who made it or drank it when it was young. One should remember that this wine was produced during the First World War, which means that it was probably made essentially by women and old man, as most able-bodied young men in France at that time were either dead or sitting in trenches waiting for another bloody charge. 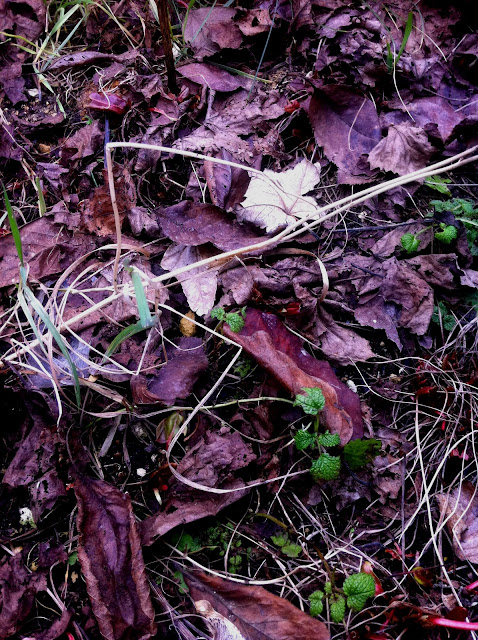 As I was taking the pictures above with my telephone camera (the wine was a surprise, or I would have taken a proper camera﻿), I noticed the leaves and their pattern on the ground in the pocket vineyard that Yves Legrand has planted in front of his bistrot, Issy Guinguette, and above the huge undergound cellar storage system that he founded some 30 years ago at the suitably named Chemin des Vignes. Only when I downloaded the pictures and was making my selection did I notice that there were fresh new shoots, announcing the coming season, pushing through the carpet of dead leaves from the vines. Life goes on.
To know more about the Legrand family and what happens at Le Chemin des Vignes: http://www.chemindesvignes.com/
Posted by Unknown at 06:52

Email ThisBlogThis!Share to TwitterShare to FacebookShare to Pinterest
Labels: wine vin and vino