Down the Loire to Nantes

The Loire is one of the world’s great wine rivers, rising in central France before passing by, and often through, an interrupted string of wine appellations, such as Sancerre, Touraine, Anjou and Muscadet. Before the advent of rail and the combustion engine, wine used to travel down the Loire in considerable quantities. The question of transport was in fact the reason why practically all traditional wine-producing regions throughout Europe lie along rivers. This alone is an incentive to explore the Loire, but the main suject here is Nantes. Let’s get there. 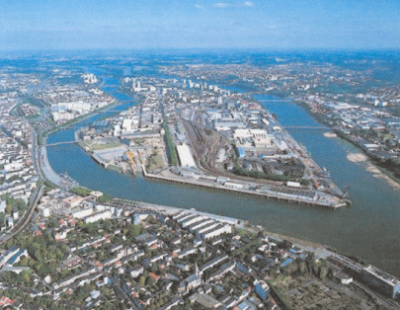 The Loire is a very wet river. I know, all rivers are wet by nature, but somehow the Loire seems particularly wet. This impression may stem from its scale, its occasionally meandering course, its multiple divisions into branches, the surrounding green countryside, or the frequently moist weather conditions that roll over and in from its even wetter destination, the Atlantic Ocean. Probably a combination of all of these. Towards the end of the Loire, and built around it, lies Nantes, a city that I discovered quite recently and to which I have since returned with pleasure. Nantes is easy to reach from Paris by the TGV (fast train). The journey takes just over two hours and brings you right to an area which, unlike for many railway stations, is actually IN the town, not in some weird and usually sordid no-man’s land. As from the town of Angers, about twenty minutes short of Nantes, one follows the course of the Loire and can therefore experience, visually, its expansive wetness. In the summer and on bright days it shines like silver. On dark winter days it is as dull as unpolished pewter. In between it just hovers, reflecting light  in ripples and patches as it flows. 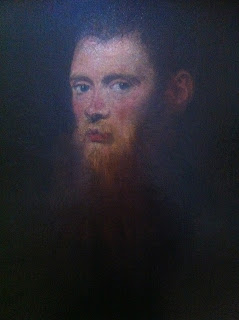 Entry points to all towns nowadays are depressing and totally look-alike: industrial semi-wastelands, buildings covered with garishly ugly and mindlessly repetitive graffiti, run-down steel, glass and concrete, usually clad in varying shades of grey. Nantes, which has invested in a good public transport system, has trams and buses at the station ready to whisk you away, but, since you are already in the city, you can walk, and some fine botanical gardens lie just across the road, forming a green pathway to the spacious art museum which has an impressive collection of classical and modern painting, as well as temporary exhibitions. Here is one of my favourite paintings on show, a portrait by Tintoretto, but there is also Picasso, Monet, lots of Kandinsky and an impressive collection of the contemporary Danish painter, Kirkeby 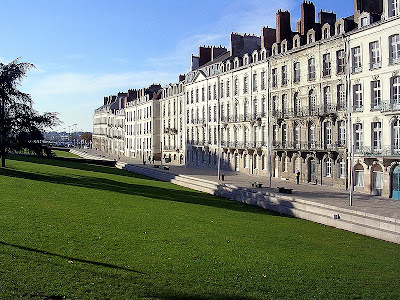 One of the city’s tram lines follows the river and the often grand 18th century facades that line the water-front. Nantes, like Bordeaux and Bristol, grew shamefully rich during this period through commerce based on the slave trade. In fact Nantes was known as the « slave capital ». This was wrapped up for many years under the less-than-honest designation « triangular commerce », referring to the vessels’ journeys from France to Africa with trinkets and cloth to buy slaves, from West Africa to the Americas with human cargo treated as animals, and then back to base with timber and other goods.  At least Nantes has now publicly owned up to this fact and, in the excellent museum housed in the medieval fortified château, didactically explains this miserable commerce to all. 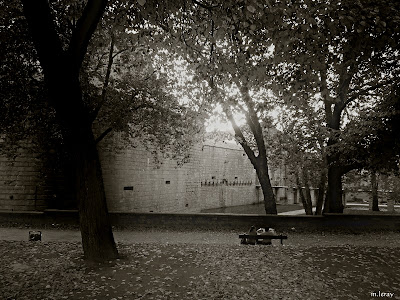 The town grew around the river as it opens up into a long estuary, and was for a long time centred on ship-building and related activities. This, and its strategic position as a gateway to Brittany, explains why it has often been extensively raided and bombarded, not least during the second world war when it was a major naval base for the nazi forces. Chunks, but fortunantly not all, of the old town disappeared under the bombings, so architecturally Nantes has nothing like the riches of Bordeaux. Yet there are some fine remains, particularly in the section along the river front. In fact one could almost say IN the river, as parts of the town, as it grew, were built on a drained meander of the Loire. This section, known as Ile Feydeau, lies on sand and so the tenuous foundations have moved, making the linked buildings rely on one another to stand almost upright. The façades (and I imagine the interiors, but I have never been inside) are magnificent but I expect it is a full-time job for a few joiners to keep doors and windows functioning! 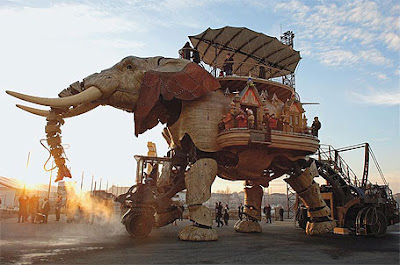 The industrial activities of Nantes, which must be France’s 6th or 7th largest city, have gradually declined, starting with the shifting of ship-building and repair work out along the estuary to Saint Nazaine as from the 1970’s. This has left vast areas on the left bank deserted, with their cohort of now useless hangars and workshops. Most have been torn down, but part of this vast area, which can be reached from the old town by bridges, has been converted into a modern-day playground for all ages, particularly around an amazing venture called « Les Machines de l’Ile », where full-scale animals are constructed out of mixed materials (wood, metals and so on) and made to move and even take people on board. The most impressive and famous of these is the 12 metre tall elephant that, through its 450 horsepower motor and complex articulations, can not only walk and trumpet, but take passengers on board, travelling at speeds between 1 and 4 kms per hour. This whole area is fascinating and is an excellent example of what can be done with abandoned industrial areas. 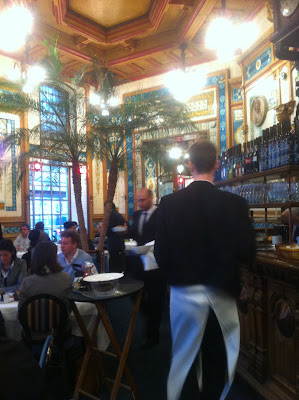 photo David Cobbold
Walk back into town for lunch or dinner? One essential watering hole is the famously beautiful late 19th century brasserie called La Cigale. In French folklore, as La Fontaine relates in one of his fables, the cigale (cicada), flashy and extravagant in its behaviour, is contrasted to the industrious and economical ant: a sort of animal bling-blinger. La Cigale lies next to the theatre and was, at the time of its construction, the place to go and be seen for Nantes society. Open all day and until late, it has thankfully retained its magnificent decor of the period and serves good food with an equally good selection of wines.

And what does one drink in Nantes? Well, obviously one drinks Muscadet, the local white wine, which, at its best, can be deliciously fresh, delicate and crisp, ethereal as the sky that floats over the region. Strangely, the town of Nantes seems rather to turn its back on its local wine, maybe because the names are not linked: just the opposite to Bordeaux which embraces the wines that bear its name.

As one emerges from La Cigale, there is a splendid shopping mall of the same period just nearby to walk up and down (literally, as it includes a long staircase to adjust to the steep slope down towards the Loire). 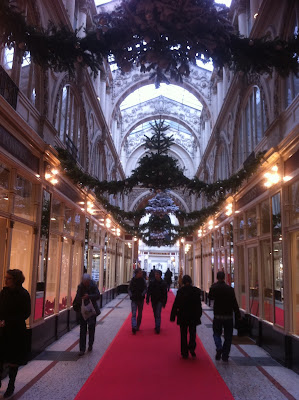 Nantes has much more to offer than this short account can hold. As with most cities built on a river, it has a kind of internal light and brightness. Its best parts can be easly walked and there are free bicycles and good collective transport systems. Go and look for yourselves…
Posted by Unknown at 06:14

Email ThisBlogThis!Share to TwitterShare to FacebookShare to Pinterest
Labels: places to go