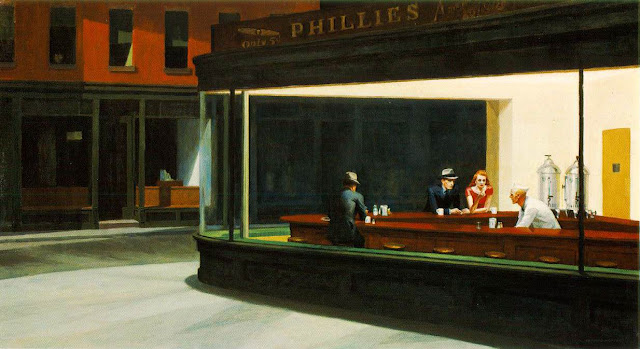 Most people will have already seen, in some form or another (usually a postcard or a poster) the above painting of Edward Hopper, called Nighthawks. It is undoubtedly his most famous work and was part of the recent and magnificent exhibition of Hopper's work that I finally saw last week in Paris, at Le Grand Palais. This exhibtion, which was on for 4 months, has broken all attendance  records here in Paris for major exhibitions, apart from that devoted to Monet. It received some 780,000 visitors. This is a problem for the attentive visitor as the crowds are so considerable that it can be hard to spend time in front of some pictures. But back to the real subject, which is of course the work of this considerable artist.

The above work contains many of the the recurrent themes and techniques used by Hopper in his paintings : Light and dark (chiaroscuro for those who have studied Italian painting), the power of colour, the dynamics provided by the diagonal in a composition, the play of inside/outside (generally through windows), and the obvious loneliness of his human sujects. Usually these elements are used two by two, or three by three, in his paintings. But in Nighthawks they are all there at once. It should be added that this painting also illustrates the considerable interactions between Hopper's work and films. Fritz Lang and Hitchcock, amongst others, surely influenced him, while he in turn certainly influenced both Wim Wenders and David Lynch. Perhaps all of this explains why this painting can be considered as Hopper's masterpiece. 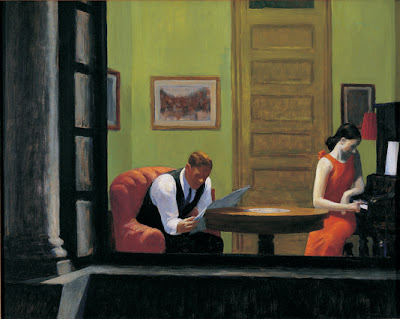 Taking the last theme, that of loneliness, this is well illustrated in many of Hopper's works and it is often (but not always) loneliness within the couple as in the above painting. The tools of strong horizontal and vertical construction, just given a flick of dynamics by a couple of diagonal directions and strong use of light and shade, are well in evidence here, as is the use of colour contrasts (red against green). 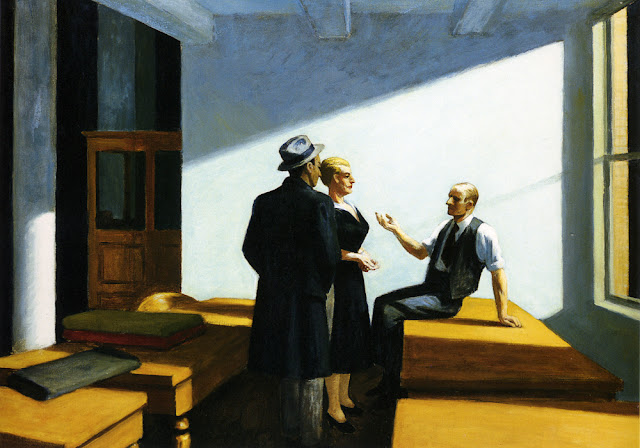 Few of Hopper's paintings use the power of the diagonal and the contrast of light and shade with such power as this painting, called Conference at Night, which also shows his clear will to symbolise, as well as to dramatise scenes by removing almost all details that do not serve the construction of the painting. This is why it is inexact to describe Hopper as a "realistic" painter. He uses a form of realism to make a symbolic representation of a stutuation or theme. 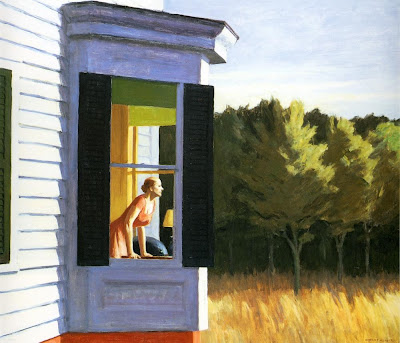 The above painting plays directly on the contrast between the inside and the outside, man-made and natural, while showing how the two are indispensable to each other. Hopper clearly experienced this intensely in his regular stays and through his many works produced along the north-eastern coast of the States where he had a studio, using his wife as his sole female model (I believe she was intensely jealous). The ouside lights up the interior, whereas the interior puts the outside into perspective through the contrast between rectilinear, man-made shapes and the softer forms of nature. Again, diagonals subtly point the eye to the right side of the painting, which is apparently less intense than the left side. 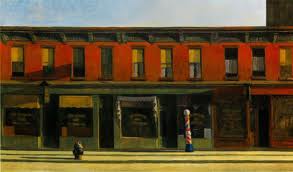 Hopper is perhaps never stronger in his daring use of composition and his subtle use of colour as when he stays in town. In this picture, the influence of the cinema on Hopper and his subsequent influence on it are both very evident. One can in fact imagine the travelling shot or the next scene. 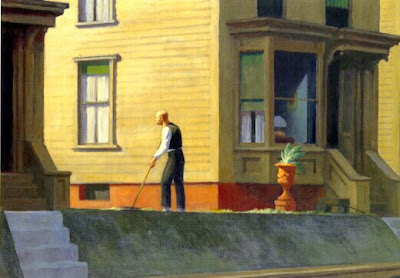 Light, once again, strong but subtle use of colour, compositon that mixes verticals and horizontals with a dash of diagonals to give directions to the eye. And of course light, the all-powerful, all-embracing light that is life, both to us and to Hopper's pictures. Hopper is, in a real sense, a "timeless" painter as his work seems to form a continuuum in which it is hard, apart from his early work, to situate a sequential evolution in his style. Twenty years separate the Early Sunday Morning painting from Cape Cod Morning, but one could never tell that just by looking at them. Maybe that is why his paintings come through so very clearly to us today.

I will be returning to Hopper shortly, as there is much more to be said.
Posted by Unknown at 20:49