David Hockney and his painting (1)

A short while ago I published an article about a book I read recently: a book which consists of a transcription of a long series of conversations between the art critic Martin Gayford and the artist David Hockney. For those curious, here is the address of that article, in the section of this blog that I have called "read on":
http://morethanjustwine.blogspot.com/2011/10/david-hockney-sees.html

As I promised at that time to return shortly to the subject matter of this excellent book, ie the painting and other visual work of Hockney, here goes.

I should state at the outset that I have always liked and been interested in (not the same thing, necessarily) this man's work. Way back in the 1960's, when still at school and actively involved in trying to paint and do other stuff in the college art premises myself, I managed to get David Hockney to come and talk to us about his work one evening. To my surprise, he accepted (I didn't realise at the time that he might just have had another interest in coming to talk to a bunch of schoolboys, but everything went fine and nobody seemed worried!). I also remember at the time his seemingly off-hand (and in fact probably modest and just down-to-earth) way of talking about some of his work. In particular of this painting, called Flight into Italy. 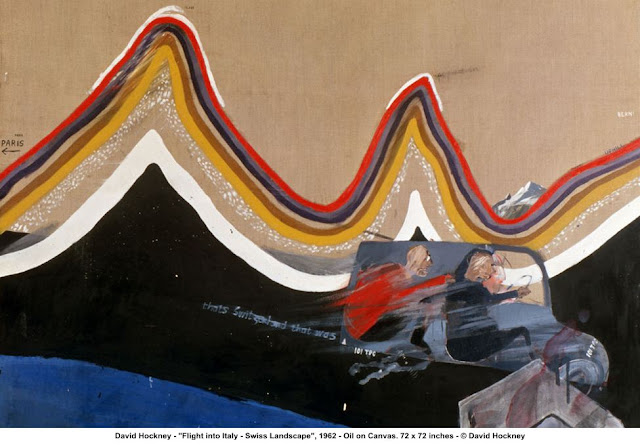 He explained that he had gone to Italy with some friends to look at paintings and architecture, and they had gone in a small van. Hockney told us that he was stuck in the back of the van (with the red coat, probably), and so could not see the mountains properly as they went through Switzerland, so he had to get a geology book to paint them when he got back, hence the layers.

This work from the early 1960's is quite typical of what I call his "semi-flippant" style, which is often allusive to everyday situations, including his own sexuality, and, to my eyes, paying some hommage to Francis Bacon and Jean Dubuffet, amongst others.

The painting below is called "We 2 boys, together clinging together", and it dates from 1961. His titles were often included in the painting at that time. 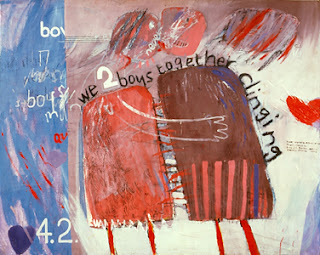 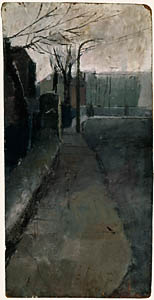 Hockney was born and brought up in Bradford, Yorkshire, and his early work from the 1950's shows a gritty, Lowry or early Van Gogh-like atmosphere that owes just as much to his own acute sense of observation, to which I will return.

I very much like this painting on the left, which dates from 1956, and which is called "Eccleshill Street".

The one below, from the same date, is entitled "Fields, Ecceleshill" and is doubly interesting to me as, in a way, and not only on account of it's subject matter, it forshadows something of David Hockney's current work since he has returned to live in Yorkshire, having for many years lived in Los Angeles, with periods spent in London and Paris. 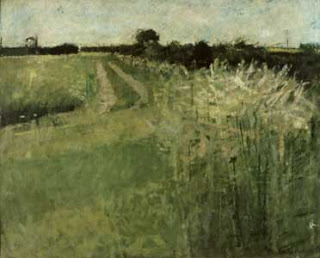 Hockney has always been interested in the way we see things, and, just as much, in the way these perceptions are (or can be) transcribed into what he calls "marks". He is a brilliant and precise draughstman with "classical" materials, but is just as ready to use modern technology, such as the i-phone or the i-pad on which, or with which, to make his marks. Below left is "Still life with a book", a lithograph from 1973. 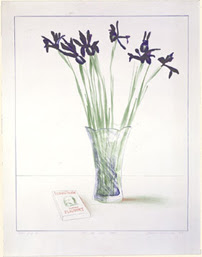 And, to finish this first part of my look at Hockney's work, here is an image of a recent painting done in Yorkshire, to show what I was getting at when I said that, to some extent, some of the early works from the 1950's make me think of his current work. Sure, the "marks" have become more sophisticated, and the technique and way of looking both more self-assured and personal.  But if they hadn't, then what would his accumulated experience have meant?

This work is made up of 50 panels, and measures 180 x 480 overall. It is called "Bigger trees near Warter", and was painted in front of the subject, or, as is said in French, "sur le motif".

What I find so impressive is the man's constant, incessant curiosity and the pleasure he obviously takes from looking, organising and leaving his "marks". As well as his vast and in-depth knowledge of art as a whole. I will probably return to this particular subject soon, having in memory a remarkable film Hockney produced for television on the way painters used technical aids like the camera obscura from the 17th century (at least) onwards.

If you want to take a closer and longer look at his incredibly productive career, I can strongly recommend Hockney's very well-organised web site: