I do not expect that many of you will have heard of this author, who writes in serbo-croat. Some of his works have been translated, and I read one of them recently in French. Its title is "La bouche pleine de terre", which I suppose one could translate into English as "A mouth filled with earth", or again as "A mouthful of earth": yet these two versions do not have the same implications, and the ambiguity of this reflects quite well the more fundamental ambiguity of this remarkable text. Translation can be tricky and will often change the slant of things! 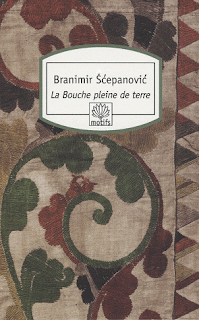 The author clearly does not like being photographed, since practically no pictures of him are available on the net. And it is equally difficult to find any information about him, at least in English or French.
But this short book (under 100 pages) is one of the most impressive things that I have read in the past 6 months. It takes the form of a sort of double narration, with the central character described in the third person and the other characters being decribed in the first person plural. This has the strange effect of distancing the reader from both parties whilst allowing him to see that he could possible be identified with either. And, reading it, one finds oneself oscillationg between the two sides, naturally sympathising with the "victim", but still seeing how the others can be caught in their own trap. In other words, the story told has a universal application. In this instance the result is scary as it shows all the ambiguous horror that can develop from misunderstandings.
I will not tell the story, of course. Although it could take place anywhere, it bears dark echos of the recent history of former Yugoslavia. And the story is quite terrifying simply because its development seems so inexorable. It concerns victimisation, and how that can develop out of misunderstanding and a lack of real contact between people.
Other books of Scepanovic have been translated both in English and in French. And he has also written film scenarios.
As a footnote, I should add that I heard of this book thanks to the owner of one of Paris' many independant bookshops. It is one of the joys of contemporary France that independant bookshops have survived and even flourished in this country, unlike what has happened in England over the past 20 years or so. This is clearly due to a law (made by the the former socialist Minister for Culture, Jack Lang) which prevents anybody from discounting books by more that 5% of their retail price. This has stopped large supermarkets and other mass distributors from cutting out the small shops who could not afford such dumping pratices. In this instance, the results have been to allow more choice and diversity in the printed world, available to many and in more places. Intelligent forms of government that control the stultifying excesses of mass distribution are a blessing.
Read on...
﻿
﻿
Posted by Unknown at 00:00

Email ThisBlogThis!Share to TwitterShare to FacebookShare to Pinterest
Labels: Read on