It seems that pigeons are able to recognize styles of paintings, so when will we see our first pigeon art critic? And, when I read some of the elucubrations of those who describe themselves as art critics, I wonder whether this might not be a peck forward. 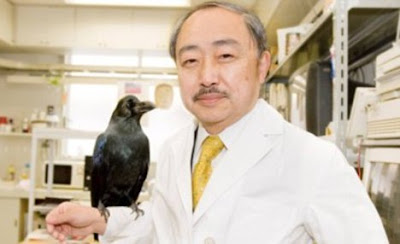 Professor Watanabe with a jackdaw, NOT a pigeon. Are jackdaws better art critics than pigeons? We will just have to wait and see.


I was both fascinated and amused recently by an article in the Science & Techno supplement of Le Monde newspaper that informed about the experimental work of Shigeru Watanabe concerning pigeons and paintings. For some time now, this professor of psychology at Keio University has lead various experiminents that revolve around the visual and cognitive capacities of pigeons with regard to painting. 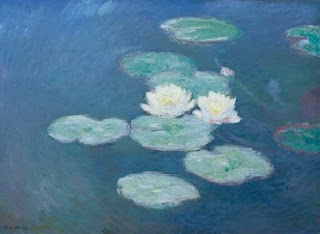 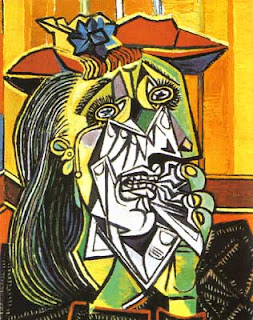 Monet and Picasso. I have no idea which paintings by each artist were used in the experiment, but the difference here is clear enough, including for a pigeon (or an art critic)


The first published study of Watanabe and his colleagues on this subject dates back to 1995, when they trained pigeons to descriminate between colour slides of paintings by Monet and Picasso. After an initial training period, the pigeons were then shown works by these two artists to which they had not previously been exposed and they were able to discriminate them. They were not persuaded to spell their names however. Even more surprising perhaps, they were also able to categorize styles between different painters. Monet, Cézanne and Renoir were grouped together by the budding art-critic pigeons, whereas Picasso, Braque and Matisse were placed in another group. It is also interesting to note that when Watanabe presented the pigeons with a painting by Monet upside down, this disturbed their discrimination, whereas the same operation with a cubist painting by Picasso did not. The probable implication here being that a more realistic representation of an object can more easily be disturbed in the visual discrimination process than a more abstract one. 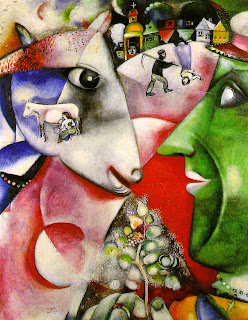 Chagall and Van Gogh might well have been a harder task for the pigeons, again depending on which paintings were used in the experiment

Then, in another article published in 2001 by Watanabe in Animal Cognition, he attempted to compare the relative capacities of pigeons and human beings in distinguishing the works of one artist from another. In this instance the two artists were Chagall and Van Gogh. Watanabe trained his pigeons to distinguish four paintings by each artist that were projected onto a television screen. The training was effected by feeding them grain when they pecked a button when a Chagall painting was shown, and nothing when a Van Gogh came on the screen. Then the process was reversed, with the Dutchman's paintings providing the reward. When the pigeons became 90% proficient in identifying the right painter, Watanabe introduced 3 paintings (2 by Van Gogh and 1 by Chagall) that the pigeons had never seen before. This did not notably phase the birds, neither did the removal of colour from the images, or indeed hiding half of the pictures. Watanabe then turned to human beings, just skipping the grain feeding part. I was quite relieved to read that the humans were as good as the pigeons in distinguishing the style of a Van Gogh from that of a Chagall. Were they fed biscuits instead?

Another study was published in 2009, again in Animal Cognition. This is where we get to the point in my title about pigeons as possible art critics, as this time Watanabe introduced the notion of "good" and "bad" art. He had human observers classify several children's paintings as either "beautiful" or "ugly". Pigeons were then rewarded for pecking at the "beautiful" paintings and not rewarded for pecking at the "ugly" paintings. They were then presented with new sets of paintings of both aesthetic categories and the results showed that they were able to discriminate between the two. In another experiment, pigeons were also able to discriminate watercolour paintings from pastel ones.

My question to this is "who decides which paintings belong to each category", which takes us back, more or less, to square one! I am also slightly alarmed at the idea that we should let loose flocks of pigeons in galleries to see which paintings they peck at the most. This might of course help to destroy a lot of the junk that passes for art in many places, but, then again, they may decide to peck at all of it, "good" and "bad", in their search for grain. So maybe we are stuck with art critics after all. Perhaps we should try crossing them with pigeons, or else feeding them grain?