If you want to know my answer to the rhetorical question posed in the title, it is emphatically "all 3".

The idea of bathing in champagne an old fantasy that has been lugged around for ages, but it came to my attention recently, thanks to the UK trade web site called Drinks Business, that a London hotel has revived the stupidly decadent practise of filling baths with champagne for customers who have more money than good sense.

I should also mention that I have already published a version of this story here in another blog for which I write, in French. This blog is called Les 5 du Vin, and I write an article for it every Monday, whilst my colleagues deal with the other days of the week. I should also add that we recently won a prize for this blog (The Wine Blog Trophy see here) at a wine trade fair in the Loire Valley (Le Salon des Vins de Loire), partly thanks to an article that I had written a few months ago on a wine bar situated in this region and called Café de la promenade.

The Cadogan Hotel, in London's Knightsbridge district, has a bit of a history in the field of decadence (if one wants to call it that). It was here that Oscar Wilde was arrested for sexual practices that were, at the time, considered as reprehensible. It was also here that the future English King Edward VII held trysts with the actress Lily Langtree. Given that the then Crown Prince, son of Queen Victoria, was known by some of his contemporaries as "Dirty Bertie", I can leave you to fill in the gaps.

According to Drinks Business, the Cadogan Hotel is offering its weathier clients to fill their baths with champagne, as from the 14th of February (Saint Valentine's day in case you missed it) and for the rest of this year.

For the modest sum of £4,000, someone will pour 122 bottles of a champagne celled Louis de Custine, vintage 1998, into the bath of your hotel room and even heat it to the desired temperature. I do not know whether you are allowed to add lemons and spices before drinking the stuff. If you like cold baths, probably not. What is certain is that you will need a good shower afterwards to avoid stinking like an empty wine vat, and probably feeling a little sticky from the added sugar that is part and parcel of most champagnes. 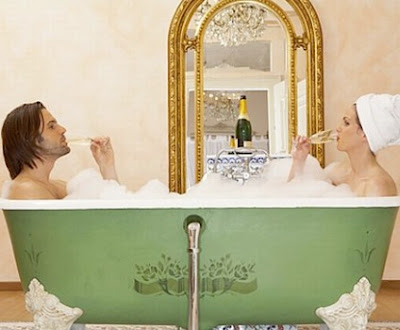 To add insult to possible injury you can even request a "bath butler" to come and serve you one of the six "gift" bottles of the same brand of champagne in which you are wallowing, accompanied by strawberries coated in chocolate (yuck!). We do not know if the bath butler is blindfolded to protect your intimacy on this wonderful occasion. Maybe he'd fall over and send the tray crashing into the bath, turning the great event into a blood bath! 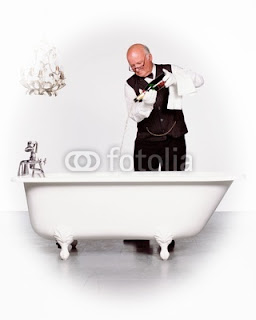 I have never heard of Louis de Custine Champagne but I see that it retails for around £25 per bottle in the UK. Looks like thay may have a bit of stock on their hands. If bathing in an unknown brand of champers doesn't tickle your fancy, then the thoughtful people at the Cadogan Hotel have other solutions on hand. For £6,000 you could opt for vintage Perrier Jouet. For £8,000 you have the choice between vintage Veuve Clicquot and vintage Perrier Jouet Rosé (bathing in the pink!). But the ultimate has to be a bath of Dom Perignon 2002, for the incredibly modest sum of £25,000. If you can find nothing better to do with your pots of money than this, I have several suggestions for you, so please get in touch! 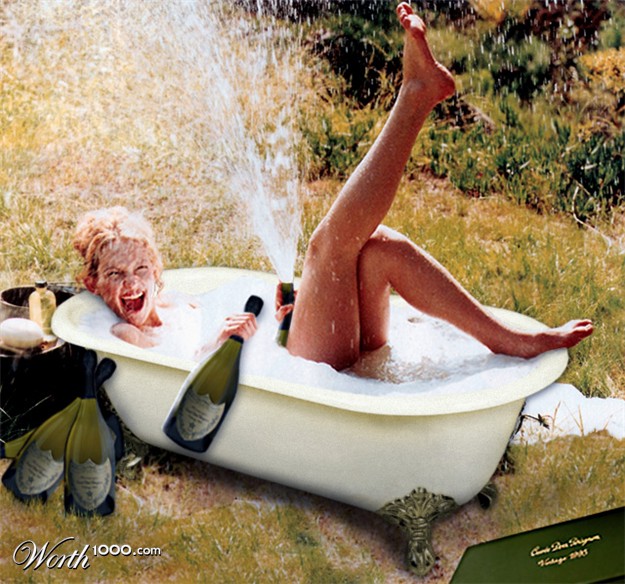 Not sure that the bath in this photo is big enough for 2. Or that I would want to take a both outdoors at this time of the year.

According to the hotel, at least one client has paid the requisite deposit for the top option with Dom Perignon in this contest of indecent stupidity in the show-off stakes.

After considerable research, I have manged to procure images of the projects sent in by agencies invited to compete to produce a poster campaign to advertise this great idea. Some of them seem to need a little education as to the geographical origins of champagne, as indeed as to the types of cork necessary to keep its bubbles in the bottle. Here they are..... 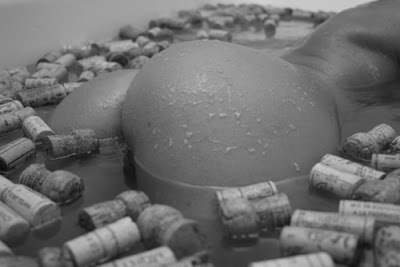 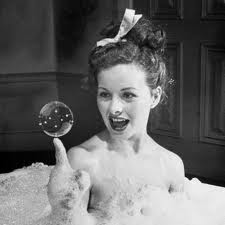 It is perhaps to be noted that the last image of these three shows that the Champagne bath fantasy was probably at the origin of the product known as bubble bath.

Enjoy your next bath!